January update
I have now finished all the Project Linus quilts I have been working on since the start of the year.

I have also made several of these Kismet pyramid pouches from a pattern by AitchBee at Little Patch Pockets, well worth a look at her website. Helen is a Modern Quilter along with her friend Helen Howes at Helen Howes Textiles, another inspirational website to look at. They both have patterns and techniques, some free some paid for, and also produce a joint news letter 'Modern Art Quilters' that you can sign up for on either website.
These are numbers 2 and 3, I have already given the first one as a present containing a face mask and small bottle of hand sanitiser.
February update
Next two Linus quilts are 10 inch dress blocks. I used up some fabric I bought from Aldi that I had already used to make a Linus quilt. I used calico for the background with pink Flutter fabric for sashing and borders on one and lilac Spraytime with orchid Flutter borders, backed with cream fleece. Both turned out very pretty. 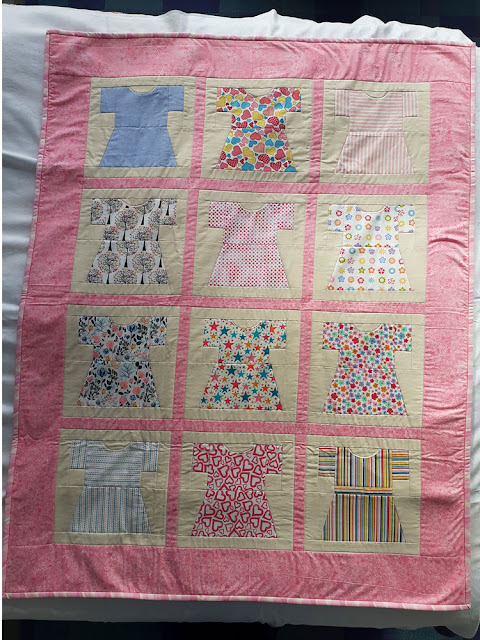 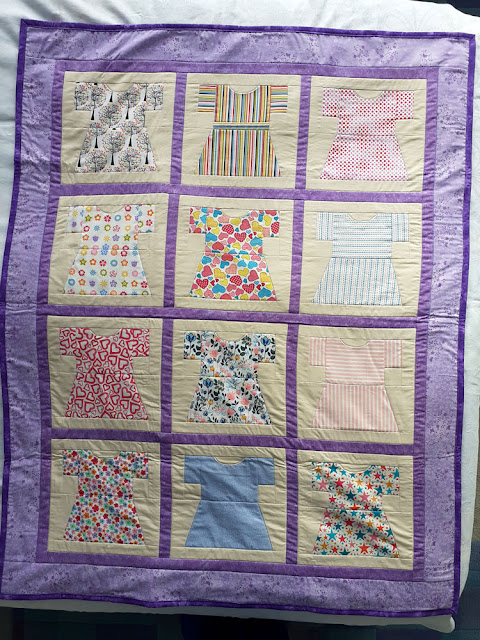 This month I also cut out 55 x 60 degree 1 inch diamonds to make a Moravian star, something I have been meaning to have a go at for a while. I sewed 5 diamonds together in 11 different colours and stitched a contrasting 2mm Miracle bead in the centre of each. I bought the miracle beads from Totally Beads, a lovely website for beads an beaded projects.

April update
I made two more Kismet bags to give as birthday presents, unfortunately I did not take pictures of them.
May update
For my birthday I was given two fat quarters of fabric with bees on it. The background colours were turquoise and blue, the bees were yellow black and white. I decided to make a Linus quilt using Creative Quilting's 'Simple Take 5 Fabrics' block, adding fabrics that were black with turquoise dots, turquoise with white dots, yellow with white stars and a turquoise batik with dots. It was backed with beige fleece and given a blue binding.
June to August update
Last year I bought a book called The Patchsmith's Sampler Quilt Blocks by Amanda Weatherill. It contains fifty 6 inch sampler blocks. I tested some out making mug rugs, which I gave as presents. I started making them in June with the aim of making a quilt. By the end of August I had made the first 30 and started cutting out the rest. I liked the look of the blocks, but was not sure if I would find making 6 inch blocks a bit too fiddly. I am enjoying making these much more than I anticipated and don't find them at all fiddly. Being small they are very good for using up scraps.
I also made some Rainbow Heart decorations from a kit using Miracle beads from Totally Beads. These will also be given as presents, including one for myself.
Posted by Christine at 15:56