Seven weeks of lockdown, due to the Covid 19 pandemic, has given me a lot of time to get on with making all sorts of things. Since my last post I have been busy, maybe that's why the time seems to be passing so quickly. My last two projects in December 2019 were a charm square bag and a Linus quilt on a nautical theme.

I bought these charm squares a couple of years ago at Sandown, I had plans to make a quilt using them with a jelly roll I had, but decided I didn't like the colours together or the design I had come up with. The two jelly roll quilts I made for Linus appeared in my previous post.

This Linus quilt uses 10 nautical themed squares, I bought these years ago at a quilt show. I have made several quilts using different themes with these picture blocks. The Jags are from 'A Passion for Patchwork' by Lise Bergene, full of lovely projects - bags, cushions, table runners, hangings, quilts, etc. I find it an inspirational book. 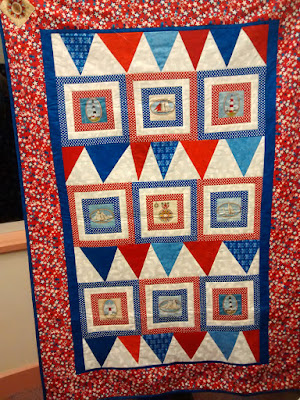 A Linus quilt using up the remains of the charm squares as pinwheel blocks I saw this design in a library book 'Little Quilts' by Sarah Fiekle and Amy Lobsiger. As I started with 5 inch squares for the pinwheels, my quilt was larger - 8.5 inch blocks. I ruined 2 star blocks trying to satin stitch the sharp points, so I decided to use one of the patterns on my sewing machine, a vermicelli style stitch instead. It did the job and cut out the frustration of satin stitching sharp points. I enjoyed making this one and will use the pattern again. 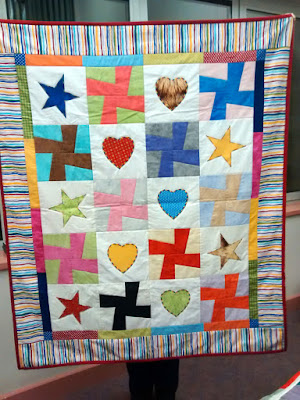 I made several smaller projects during January, including

The tote bag is one of three I made from a series of panels a friend gave me last year. I used an old curtain and it's lining for the rest of the bag, and backed the pieced panel with an old sheet. Three repurposed bags.

In February I decided to do some clothes making. I had a previously used Burda blouse/tunic pattern that I felt needed altering to make construction easier. I made a blouse with the alterations, it turned out very well. I also had a pattern from Tilly and the Buttons for an Orla blouse, bought because I liked the shaping used in this garment. I made a toile for this one as I had not used this make of pattern before. It needed some minor alterations before using a V&A fabric - seaweed - to make it up. Again a successful outcome. I also made another T shirt from a McCalls pattern that I have used several times. I am really enjoying making clothes, especially when they come out well. I also made a table runner from a pattern I bought last summer at Sandown from a company called OliVen, I liked the unusual shape.

On to March, another productive month. Before we went into Lockdown, I made an Orphan block quilt from blocks picked up at our last Quilt group meeting. I was quite pleased with the result, as the blocks were all shapes and sizes. Despite my efforts to try and make them all the same size, I ended up with six at 12 inches square and six at 12.5 inches square. Instead of joining them with sashing I bordered them with 1.5 and 1 inch strips respectively, in two alternating shades of turquoise. A useful method to make the size difference less obvious.

I also made a small wall hanging from some hand dyed wool felt squares and stranded cottons from 21st Century Yarns. Again I have had these for a couple of years, I had even worked out what I wanted to do with them. I had used stamps and metallic paint to print circles and flowers on to them. I then used the embroidery thread and lots of beads and sequins to embellish them. I stitched them on to a piece of acrylic felt to give the hanging more body. It's a bit OTT, but I love it.

Come Lockdown, when I was not tidying up the garden, I was sewing again. I made three more Linus quilts, two from my scrap box and one from a batik panel.

I also made a small contribution to PPE by making 12 scrubs hats and 8 scrubs bags, as well as 20 crocheted ear savers.


I made a rainbow hanging for the front window. The pattern was downloaded free from Creative Quilting (Molesey). Neighbours have commented on how nice it looks. 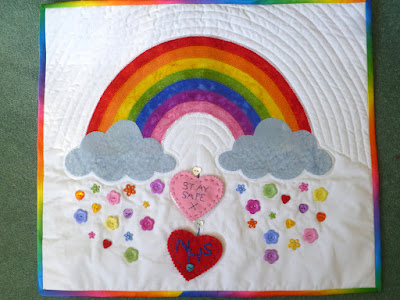 I did a bit more clothes making, a tunic and two pairs of trousers. I made toiles for the two styles of trouser, as I never can get trousers that fit comfortably at the waist. The adjustments I had to make have resulted in two pairs of well fitting trousers. I will definitely be making more now I have the fit right. I also finished a second Easy Stack quilt from the Paula Doyle workshop I did with Linda Seward last summer. It looks very nice, when I have a decent picture I'll show it.

Lastly, when watching the TV in the evening, I have been crocheting blankets for Linus in an effort to reduce my yarn stash. After three blankets using a Closed Shell pattern, it has gone down a bit. 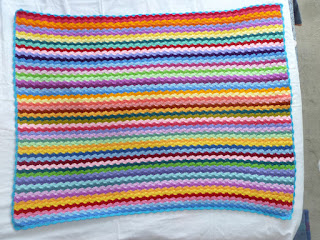 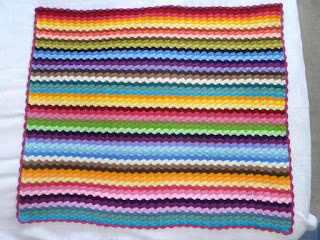 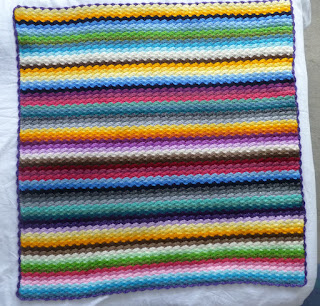 Next job is to sew some face masks for use at the supermarket.
Posted by Christine at 13:07