There is a thunder storm and heavy rain outdoors today, so a good opportunity to look back over my achievements so far this year. So, in no particular order, I have made several birthday presents - a table runner, purse and 2 bags.

This runner was made using a Creative Grids template Scrap Crazy 6 inch, this is the third one I have made. I particularly like using striped fabrics to make these (see posts from June 2016 and November 2017). I have also used this set to make a pair of table mats of my own design and one of the patterns to make a table runner (see post from October 2017).


This little purse is a pattern from the Modern Quilt group, it is by Jackie Norris and fun to make.


The knitting bag is for HT's daughter. Apparently her knitting needles stuck out the end of the one she was using, a smaller bag I had made for her mum previously. She liked this one and asked for a purse to match, unfortunately, I have no more gecko fabric, otherwise I would have obliged.

HT belongs to Shirley Quilters. They had a project making small quilts from a girls dress block 16 inches square. She wanted to make a quilt for her grand-daughter using a smaller version of the block. I set about drafting a smaller version, made a block to see if it worked, nine blocks later, I am on the way to making a Linus dress quilt myself. Yes, they are a bit addictive.

I ran two workshops for my quilting group this year. One to make a circular zipped box and the other on fabric bowls. The bowl patterns are based on those from Fast, Fun and Easy Fabric Bowls by Linda Johansen. I have made several over the years I have had this book. The same author has written books on making fabric boxes and vases. All of the books are excellent.

I also made a bowl from a kit I had been given as a present. It is a Glitzy Bowl by Images of Egypt. It is beautiful and was fun to make.


I made a quilt for my brother-in -law and his wife. I had discussed it with my sister-in-law last year, but the fabric costs were off-putting. As they both had OH NO! birthdays this year, I thought I would make it as a present. I was pleased with the result, as I had adapted a design to match the headboard in their caravan. However, they like it so much, they brought it back home to use.

I have been crocheting blankets and some amiguri bits from a book I was given as a present.


I have also made a couple of quilts for Project Linus, one from a Modern Quilt Group tutorial called Interlocking crosses. It was an exercise in using a design board. The other came from Missouri Quilt Company and is called Spring Dresden's, it has a very short video on how to make a block using  tumbler and Dresden plate templates. I made the block a little bigger and added some stylised flowers, as I thought the fabrics I used a bit dull.


I have been asked to give a Christmas themed workshop to a WI group in November, so am currently working on some samples. I have bought some fabric to do some dressmaking. I managed to make one garment last year, it was so successful I want to make another. I have also seen some more patterns I would like to attempt. Just need to find the time. I still seem to have loads of stuff to finish off. I made a list four years ago when I retired from work, only managed to finish one item so far, and that was not even on the list.

Posted by Christine at 19:03 No comments:

Christmas 2016 I bought a book of Crocheted Snowflake patterns. I made all 40 and thought it would be nice to make a snowflake curtain to hang at a window. I put them all away until I came up with a design. During the summer we decided to have a sliding door from the dining room on to the patio, I now had a nice place to hang that snowflake curtain, so time to design it. This is the result, not a very good picture but it does look nice. 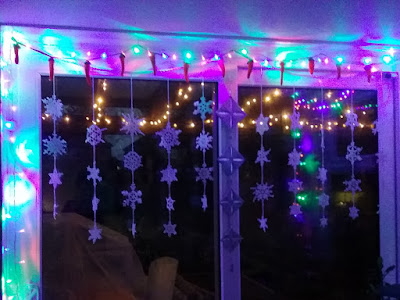 The red garland is crocheted chillies. I was going to take it down when I put up the snowflakes, but husband said I should leave them up, he really likes those chillies.
Posted by Christine at 17:38 1 comment: