Since August I have been busy working on some projects for in-house workshops, for one of the quilting groups I belong to. These are scheduled for next year, but I like to get ahead of myself, so I can check and double check my instructions. I have made several examples so I could take pictures and check the instructions for mistakes, one still slips through occasionally. Sometimes you cannot see where you have gone wrong! 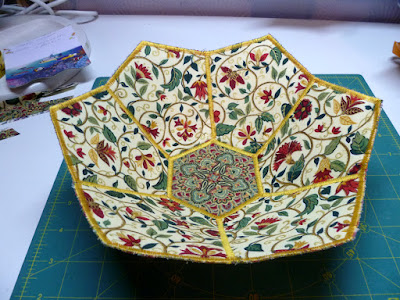 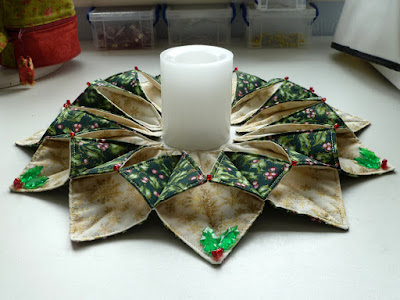 This group also held an exhibition this year as part of the 150th Anniversary of the Church, whose facilities we use for our monthly meetings. So I was heavily involved with helping in the organisation of that. It seemed to be a great success, and we had several people interested in coming to meetings to see what we get up to. Hopefully they will find them interesting enough to join the group. We sold nearly ALL of our fund raising items, this meant we made a profit even after paying for the hire of quilt frames, printing a catalogue and sundry other expenses. I recently gave the group a short talk, with examples, on different ways to finish the edges of quilts.

I have also made two birthday presents, a Christmas present and some Christmas decorations.
The first of the birthday presents was this table runner. I used a rainbow coloured stripped fabric, cut at different points to get seven stars all different. Originally I cut out plain white for the background, but I did not like the look of this and substituted a white on white print for it, much more pleasing. I used a Creative Grids template 'Scrap Crazy 6 inch' by Karen Montgomery. I particularly like this Milky Way pattern, this is the second one I have made, and it probably will not be the last. May even get around to making myself one.

The second one is this bunch of poppies. I made some yellow flowers earlier this year and thought I would have a go at some red ones for a November birthday. I also found this cute 3D jug pattern and thought it was perfect for a barge ware style vessel to hold them. These patterns were from issue 88 and 94, respectively, of Stitch magazine published by the Embroiderers Guild. The flowers are adapted from Gillian Travis' flower patterns. I found some sequins that resembled the top of the seed pod, I used what I had available - black might have been better. I was very pleased with the result.


The original jug was designed, by Anne Pye, to cover a small glass jar for displaying real flowers . I added a base and some glass beads as weights for stability. I also constructed the jug section as one piece, with the fabric bonded to fusible double sided Fast to Fuse, medium weight.

The Christmas decorations were some projects we did with the quilting group. I do like to add embellishments in the form of beads, sequins and ribbons, they make your projects special.

Although the beading may look complicated, it is quite simple to do. Start with your thread on the back edge at a point or corner, and, working away from the point or corner, thread three seed beads, take a stitch at right angles to the edge from front to back. repeat. This will give you a rope effect all along the edge. The length between stitches depends on how many and the size of bead you use. I generally do not count the number of bead loops per side, unless I want to have and idea of how many beads I need for the whole project. I have not found turning corners a problem, you could probably add a slightly larger bead to corners and points as added decoration. Must remember to try that.


I made a small Linus quilt from the plain white pieces that I did not use as part of the table runner. I drew some garden related pictures with different types of fabric marker. I had bought the markers when I was studying for the C&G Patchwork and Quilting Certificate and Diploma. I got the flowered fabric square sizes a bit wrong and had to add bits to the ends of the rows. The overall effect is quite pretty, but it could have been made better! I used wadding and backing with 'in the ditch' quilting. There is a bit of gold in the butterfly border fabric so a bit of sparkle too. I hope it makes some little girl happy.


I bought a new crochet book, on Blankets, Afghans and Throws, so have been working on some of those. I hope to be able to donate them to Project Linus when finished. I have started work on some of the Linus quilts I cut out several months ago. I have the fleece to finish at least two, must sort through the stash to check if I have enough to finish more, before I rush out to buy some. I am trying to reduce the amount of fabric I have accumulated over the years, but it seems to be a slow process.
Posted by Christine at 17:02