I find it a good idea to look back over the previous year to see what I have achieved. This gives me a focus for the aims of the coming year. I often feel I do not get around to doing very much, but a look at what I have been doing with my time is quite encouraging. I have been retired for 18 months now and as busy as ever. I still have not finished many of the projects on my list of things to tackle on retirement, but I am making progress.

This year saw the installation of a large new shed at the bottom of the garden and my husbands workshop has replaced the dilapidated garage near the house. If you are interested in this major work it can be viewed here. This change of plan meant we were able to keep the arbour, which saved a lot of manual labour. The loft is being sorted out and bits transferred to various boxes in the workshop or shed. We still have a fair bit of stuff on the patio that needs a home, but progress is being made slowly. As we had loads of construction timber stored on the lawn throughout the building process, it looks a right mess, so 2016 is a "Revive the garden" year as it has been a little neglected of late.

I still play badminton regularly, including matches for the mixed and ladies teams. My golf has improved marginally, I have been doing some Cardio tennis and I did a short course of Racquet ball. We also try to do a monthly walk with a group of my old work colleagues, many of whom are also retired.

Now on to the best bit, crafting. I have attended two more workshops since the last post, making a total of four this year. One with Sheena Norquay in Polegate called Fantasy Birds, this involved printing bird shapes in dots and curves, free machine trapunto and quilting. It is not yet complete but well under way as I have worked on it since the course. I need to print some borders to finish it.

The other was Hand Quilting with a Difference with Hazel Ryder and Terri Donaldson, run by Creative Quilting at Molesey, this one involved using hand embroidery stitches for quilting. The resulting sampler has also been worked on since and I hope to make it into a small wall hanging once I have finished the stitching. I used one of my hand dyed fabrics for this and am very pleased with the results so far.
I finished one of my listed UFO's. It was a clamshell quilt in fabric I bought at Hever from Creative Quilting. I started this one at evening classes. It is quilted with diagonal wavy lines in a variegated thread to match the clamshell colours.

I also made up a sample of Bargello into a wall hanging, this one for a friend who had admired the piece I made after the sample. We were both very pleased with the result.

Another finished project, that along with the Bargello quilts was started post retirement, is the red and white sampler quilt - bedsize. I exhibited this one at Hever 2015, it is so nice to see your large quilts hanging on a proper frame. This was machine pieced using a quilt as you go technique without backing.The backing was added after the borders were applied. the borders were hand quilted with a running feather pattern from a Lilian Hedley book. The blocks were quilted in the ditch next to the sashing.

I also completed a small sampler quilt for the QoS black and white challenge, you can view it here (halfway down the page). I keep saying, "Never again" to group block assembly, as they should all be the same size but never are!

I am making a quilt on a Communication theme (October post) for a Town Twinning exhibition to be held in Gagny, France, March 2016. Unfortunately the exhibition has had to be cancelled due to unforeseen problems booking the venue. A great disappointment for the organising group as well as those of us who have made a quilt. We are hoping to show the British quilts later in the year in the Sutton area.

Two quilts I started at workshops in previous years have also seen progress this year. A Ferret workshop undertaken in the summer of 2013 has the central panel and two borders completed, a third border is in progress. I changed the design slightly from the original, I added corner units to the borders. I decided to quilt these separately, making the construction a bit more complicated. It will be worth it as I like the design much more. I also decided to use the fabric I had dyed for the border back as the front, it was more interesting and contrasts with the central panel. I used the original dyed fabric in the corners. This means it no longer looks like a wholecloth quilt, but I think it is a lot more visually interesting.


The second is the result of a workshop with Lilian Hedley from the summer of 2014. This is a traditional style stripy quilt. It has five panels, Three panels completed and sewn together, and a fourth started.
I also made quite a few bits and pieces as fundraising items for the QoS group, including these little fairies. 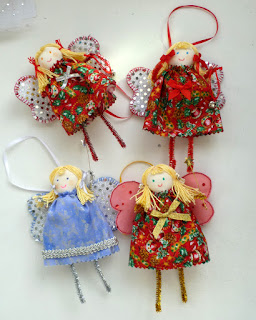 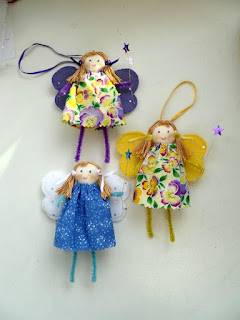 I made birthday gifts for the Quirkies.

I have also been crocheting, several blankets, some for myself and more for Romania, see one here (September post). I also crocheted some more Christmas decorations comprising of an elf, another wreath, a snowflake garland, Christmas tree (for the festive workshop) and some holly bunting. I took pictures but most are too blurred to post and the originals have gone back to the loft.

The patterns came from Issue 38 of Simply Crochet. I do find this magazine inspirational,  I do not have a subscription, I buy it if enough of the projects are appealing. Try Attic24 for some crochet inspiration, this blog is heart warming reading. I also completed knitting a cardigan, it was on the go for about 15 years and still fits.

I bought a template from Creative Grids - 6 inch Scrap Crazy - and made up sample blocks from my scrap bag. Very nice too. Now need to get around to over-dying the fabric I want to use it for.


It was my parents 60th Wedding Anniversary this year. So I helped Dad organise a party for family and friends and made some table decorations from artificial flowers. My niece organised a telegram from the Queen, which was framed and hangs proudly in their living room. Everyone enjoyed themselves. 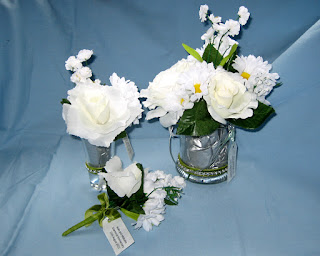 Well that about sums up 2015 achievements, this post does not include all the projects I have done this past year, as some have been documented in previous posts. If you have read this far I would like to thank you for your interest and wish you a happy and productive 2016.