I have now been retired a little over a year and  am still not finding time to do all the stuff I thought I would. On reflection, that is not so bad as I seem to find plenty to do. Recently, with the nice summer weather, I have been sorting out the garden. I have repositioned the compost heap to allow installation of a second bin. We have been trying to install a seep hose to help water one side of the garden, it is dry and shady due to the large oak tree in next doors garden. This has not been entirely successful, so back to the drawing board. Despite the dryness and shade, I have managed to get things to grow there, by researching the right sort of plants for that type of location.

We had a large new shed erected at the end of June, with double the capacity of the two old sheds. It is racked out and filling up with stuff from the old sheds and the garage, and there is still room to get at stored stuff. Long may that last. The garage is to be knocked down before the end of September, to make way for a workshop for my husband. A workshop will allow him to keep all his tools in one place, and thus facilitate whiling away many happy hours without, 'having to get up in the loft' or 'go down to the garage'. So he assures me! Handily, it is to have an opening window at the end near the house, so he does not miss out on a cup of tea.

I am still doing the sporting stuff. I decided to take up golf this year, it is improving slowly. I really do need to play more, but struggle to find the time with everything else. My badminton has improved a bit too, as I play more often these days. The advantage of badminton is playing inside, light and weather are no problem.

Craft wise, I have attended two workshops, with Jennie Rayment and Mary Gamester. I have completed two panels as a result of Jennie's workshop and made a book cover from one of the transfer painted pieces from Mary's workshop. The book cover can be seen here Quilters of Sutton under the August 2015 post. I also made the items either side, the Lil Monster pencil case, a free pattern from Moda, and the Julia Gahagan mini quilt.


I also bought Jennie's new book, Stitch Bits, and have made a bag and some robin bunting. My husband said the robins looked more like bats, so I told him he had very little imagination. But it does make for a variation on the theme, so I may have to have a go at bats. 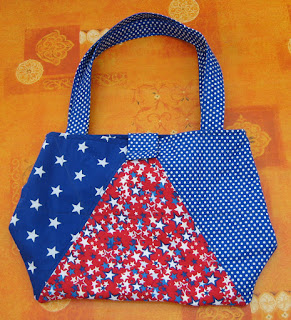 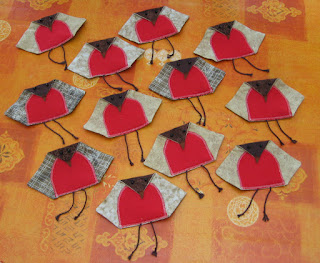 I have also been making Project Linus quilts, one from a jelly roll made to a pattern by Barbara Chainey and Chris Frances, and two from some of my husbands old cotton shirts. All were backed with fleece, making them washable and cosy.

I also made various bits and pieces for fundraising, some for my local group Quilters of Sutton and some for Region 2 of the Quilters Guild, who are holding a Quilting exhibition as part of the Handmade and Homegrown Festival at Hever castle September 11th - 13th. Why not come along and and try to win an owl related item in the Tomb-owl-a. It is a good family day out.

A selection of my fundraising items.


I had a go at making the owl pattern much bigger. These two larger owls were made as doorstops, one for me and one as a present.

I have also made three crochet blankets for myself as well as one cot blanket for charity, with another charity blanket in progress. I have decided to finish a knitted cardigan I started about 15 years ago! It was a nice pattern, but after unpicking the sleeves three times as a result of  dropped stitches in the lace panel, I have decided to make the sleeves plain.They are coming along much quicker, and it should still fit. I also made a mini quilt from a Julia Gahagan pattern. There could be loads more but I think this is enough, except for one more picture of the dyeing I have been doing this weekend.

I do have an idea for a quilt from this series of dyed fabrics. The series consists of primary and secondary colours with space dyed multi coloured pieces. Some will require over dying and I may decide to print on some of them. The quilt pattern I have in mind, requires the use of an acrylic template, can I justify the cost?

For those followers who may not have seen some of these projects in the flesh, I will bring them to the next meeting.