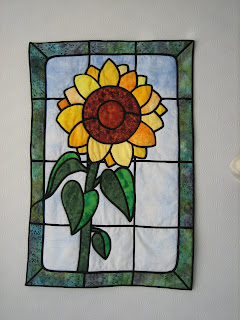 Helen, one of my quilting friends, brought this pattern into class and three of us decided to have a go. I have used this technique before stitched by hand so decided to attempt this one by machine.

I could not find a suitable background fabric to go with the flower fabrics I had chosen from my stash, so I decided to paint one. I had a piece of plain white cotton that I painted with ultramarine transparent fabric paint, graduating the colour from dark at the top to a paler shade at the bottom. I sprinkled coarse salt onto it while it was still wet to give a mlottled effect. I heat fixed it in the tumble drier once it was dry. It was exactly what I needed.

Experiments on the type of tread to use gave unfavourable results with clear and smoke invisible threads (YLI), good with fine black polyester (Gutterman polyester embroidery). I used a black nylon bobbin/lingerie thread in the bobbin. I tried out the stitching on my newly purchased Janome 4800QC and my old Singer Special Edition and decided the stitching was better on the Singer,it was also easier to line up the needle with the edge of the bias binding on this machine.

I tacked on all the coloured sections and the 1/4" bias binding and layered the top, wadding and backing. I started machine stitching the bias binding in place but was not happy with the result. I unpicked the stitching and separated the layers. I stitched the binding on the top layer, occasionally I wobbled off the binding for a stitch or two but it was a better job than through all three layers. I layered the stitched top with the wadding and backing and machine quilted them together 'in the ditch' on the Janome with invisible thread and the even feed foot. I used a black bias binding to finish the edge. It looks lovely hanging on my sewing room wall where it complements the blind (also my own work) and a sunflower picture.

I started this in January 2005 and finished it in September 2005. Helen hung hers on here yellow dinning room wall where it also looks lovely. I don't think Carole ever finished her wall hanging, she is not too keen on applique.
Posted by Christine at 20:57 No comments: 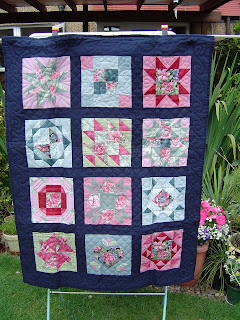 This quilt was started at a Scola evening class with Sally Connor in September 2001, it was finished by January 2002. Most of the fabrics were bought in the late 1980's, early 1990's at quilt exhibitions because I liked them.The hand-dyed calicos came from Faberdashery, the flower prints were a bundle of odd sizes, the dark green and mottled red were leftovers from other projects. The navy sashing, light green leaf print and William Morris willow print backing were bought for this project.

The quilt consists of 12 8" square blocks, with 1 3/4" sashing and a 3" border. It was hand pieced and quilted except for the binding which was machined on and hand hemmed. This quilt has a pocket on the back so that it can folded up as a pillow.

The blocks used are twirling star, stepping stones, sawtooth star, corn and beans, fox and geese, mexican star, rolling stone, weathervane. centennial pinwheel, applique heart and grandmothers favourite. The pocket block is grandmas house. The quilting design and colour (pink and dark blue threads) varied with each block, the sashing (navy thread) is squares on point with with hearts at the intersections and the border has a wave pattern.

I like sampler quilts as each block is a different pattern or technique making them interesting to work on. It is a useful way to try out new things and if you don't like the technique you need not end up with an expensive UFO as you are only using it for one small section of your quilt.

This is a much used item, that I had to repair in 2006 as it appeared to have been chewed by mice.
Posted by Christine at 20:36 No comments: 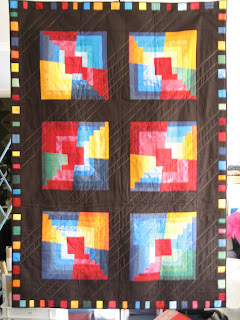 This pattern came from a magazine article. I started it in September 2003and finished it in February 2004, a quick one!

Foundation pieced 12" logcabin blocks using bright colours. The blocks were cut into four uneven pieces, mixed up and stitched back together to give offset logcabin blocks. Black sashing and borders were added, the quilting was machined with a variegated thread in diagonal lines that did not always span the whole width of the quilt.

Foundation piecing is not one of my favourite techniques, despite that I enjoyed making this quilt.
Posted by Christine at 20:12 No comments: